BABATUNDE OYEBODE WAS WRONGLY ACCUSED AND ARRESTED SAYS THE CULPRIT

finally the owner of  naijagistlive.com came out to address the News posted few days ago by linda ikeji, news had it that a certain blog-blackmailers were arrested by the intelligence at the Special Fraud Unit, SFU and one Babatunde Oyebode was said to be a mastermind of the blackmail syndicate.
Miffed by this development, one of the clients of the said Babatunde who has consulted a professional advice from competent legal luminary has said that the accusation levelled on Babatunde is illegal as he’s not in any sense part of any blackmail syndicates who have been exhorting money from top bank MDs and oil moguls.
This is the media material below as sent to this office: 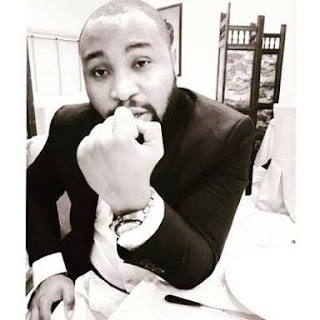 “Contrary to the recent story posted by Linda Ikeji about the young 23 years old IT personnel,  PRINCE BABATUNDE OYEBODE, who was allegedly arrested for black mailing top figures in Nigeria using the online platform www.naijagistlive.com, our researches have proven that this story is a false alarm, the facts about this story is that this young man was contacted online by an  anonymous female client to build a blog site which he did. It’s obvious this young man knows nothing about whatever content that has been posted or the motive of the client that gave him the job…


He was arrested May 27 2016 by the Special Fraud Unit (SFU) because WALE TINUBU,DAPO BALOGUN, FEMI OTEDOLA and IVIE OMOREGIE. raised a complaint on some content  posted on this blog by the admin but this man doesn’t have access to the blog site and he explained to them how he met the client and how he was paid by a man who claimed to be the  woman’s driver, the driver was arrested as well and detained for five days in the SFU custody after he explained that this woman in question lodged at Eko Hotel and Suites when she sent him to pay this young man for the job he did for her.

BABATUNDE spent a month in the SFU custody and his family members contacted the Human Right Commission to fight for him, when they couldn’t find any evidence against him he was released. Now the question is where did Linda Ikeji got her own story that claims that this young man  has confessed and admitted to a crime he did not commit?

All of these are wrong accusations the admin never stop posting on the blog while BABATUNDE is still in custody, this is enough reasons to prove that the young man in the SFU's custody is innocent and please share this across till it get to the HUMAN RIGHT COMMISSION so that this innocent young man will not be punished for a crime he knows nothing about. Right now, he was arrested again last week Saturday in his apartment and detained at the SFU custody for this same issue that has been rectified saying that another complainant called  DAPO BALOGUN reported him

This is what the blog  www.naijagistlive.com admin said
, 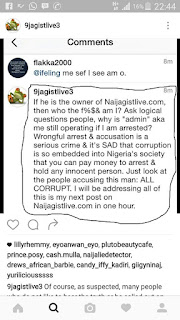 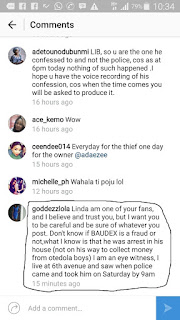 Email ThisBlogThis!Share to TwitterShare to FacebookShare to Pinterest
Labels: GIST